Elvira Carrillo, our ranking teacher, embraces technology in a careful, logical, and reasonable way. If I change one thing each year, I’ll continue to grow, and my students will benefit. 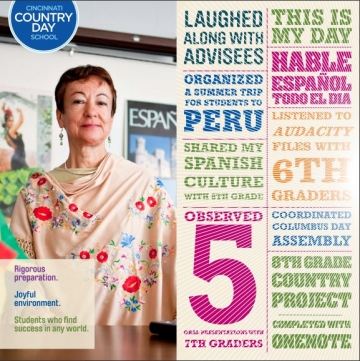 It’s getting cold in Cincinnati, so perhaps thinking about August will help return us all to one of the best times of year—late summer, when it’s time to go back to school.

I’ve written before about those back-to-school emotions and how, at least in technology, the excitement that builds in expectation of new hardware, new software, and new ideas is part of a larger desire to get back to teaching and learning. One of the big parts of my job as Academic Dean is to handle professional development at Cincinnati Country Day, much of it coming to a head in August.

This will be a two-part post. Stay tuned for how “3” is, like “1,” one of our magic numbers in the professional and pedagogical development programs at our school. For starters, though, let’s start with what my high school calculus teacher, Mr. Zolciak, called “The man with a thousand faces.” Much ink has been spilled over the significance of this simple concept—one. I spend a good chunk of my summer reading up on educational theory and works about cultural and business trends. You know the latest brain trust, right? Dan Pink, John Medina, Trilling and Fadel, Charlotte Danielson, just to name a few.

I also spend a lot of time talking with my colleague Rob Baker, our technology director, about emerging technologies and how to “sell” them. We always begin with how such tools will help enhance teaching and learning. Moodle might help Peter, for instance, because he’s been asking about a better way to disseminate documents. Screencasting might help Lisa encourage her students to record themselves explain their work in math. We do a lot of this, and I know it sounds tiresome, but it’s an important component of our success—understanding the needs of teachers.

Another reason we’re successful is because of professional faculty members like Elvira Carrillo. Elvira, a Spanish teacher in our Middle School and native of Colombia, is our ranking full-time employee. Only two other employees have been here longer, and they have both scaled back to work part-time. We have redefined “ranking” at Country Day, so make no mistake about it, Elvira is a veteran in every sense of the word. She’s a master teacher, plain and simple, and her willingness to embrace technology, while it has played a part, is not at the top of the list that make her a great educator. She has high standards, is passionate about her content area, and loves the kids . . . then there’s technology.

Well, wait a minute, even more important than technology is Elvira’s attitude toward it and toward change. Lots of people who fear technology in schools (especially when those people are faculty) assume that everything has to change tomorrow. Elvira and Country Day are proof that incremental change is best. I mentioned I love August because it brings new changes. One of the patterns I’ve really enjoyed seeing over the past six years, is the way Elvira tries one new thing each year . . . 1. Make no mistake about it, what she does with that one idea is incredible. Whatever it is, it ends up as one of our “Dart n’ Dashes” at a Tablet PC Conference. Please consider this for a minute. Elvira Carrillo, our ranking teacher, embraces technology in a careful, logical, and reasonable way. If I change one thing each year, I’ll continue to grow, and my students will benefit. I regularly hear complaints about “old” faculty and how unwilling they are to embrace change, and I love . . . LOVE . . . sharing stories about people like Elvira and Sam Tumolo (who retired two years ago and I miss immensely) because they are often our best case scenarios—teachers who balance change and tradition. I wish I had a nickel for every time I said, “You know, some of our most experienced teachers (not “old” by the way!), are our best change agents!” Wow.

So, on to the practical. You’re probably wondering what some of these mythical changes are for Elvira. Not necessarily in order, these are five of her top #1 singles:

1) This year, Elvira embraced Voice Thread to help students converse with each other (their catchphrase is “conversations in the cloud”) about work they were doing in her class. I was so busy this year that I didn’t get to help Elvira with an implementation, so Andrea Owens our current “Techbrarian” showed her the ropes. I was so pleased to see Elvira present something new at our October 2012 conference, especially something I’d only demoed, and briefly, at that. Technology leaders should always have things to learn from faculty. She brought two of her students to show our attendees their work. I think this shows how Elvira likes it when the focus is on her students and their work. Technology leaders should also be ready to learn from students!

2) Several years ago, Elvira came (when I was our Techbrarian) and asked if she could borrow a camera and an extra SD Card for a trip she was going to take to Colombia. She wanted to shoot video of natives talking about ordinary topics, things that middle-school students might find interesting, things, frankly, they identify with. She shot footage, for example, of someone who worked at a food court in a mall. She then wanted to learn how best to post her videos. We settled on Moodle (Modular Object Oriented Dynamic Learning Environment . . . I think . . . translation=free classroom management software). (OK, that’s two things!! Actually, she also had to learn a bit about editing in Windows MovieMaker, but who’s counting?!?!?). Students were able to view custom videos that their own teacher shot . . . that had something to do with her curriculum. Every teacher at Country Day has (or should have) an affordable point-and-shoot camera, and Elvira just wanted another and extra storage! Pictures are worth a thousand words, apparently, even in Spanish!

3) One of the first technologies Elvira embraced while I was here was Skype. I sent out an e-mail to the entire k-12 world language faculty, promoting a series of videoconferences we could do with experts at the Cleveland Museum of Art. Elvira expressed interest but noted that the videos would be costly because she wanted to offer the same experience to all of her kids. “What if you just got me and my brother a webcam, so that I could Skype with his students in Colombia?” As it turns out, her brother is a priest who runs a school and has a captive audience of students who want to learn English! I bought two $25 webcams, and the rest is history.

4) Elvira is a big advocate of Audacity because it enables her kids to speak Spanish and record themselves, effectively, redefining the language lab. In a 1:1 Tablet PC school, everyone can go off to a remote corner of the school (or get a cheap headset with mic), and answer questions aurally/orally. Our language faculty likes to give Audacity quizzes. They record a conversation, leaving lots of the words/sentences out. They then e-mail the MP3 to the kids who import it into Audacity and hit, not play, but record. There are “blanks” (periods of silence) where the kids have to record their responses. Every student gets the chance to “talk to the teacher!” Elvira can then assess a child’s progress in understanding a particular concept or skill. Audacity enables active learning, not just passive listening.

5) For many years, Middle School students created websites about countries of the world. We decided not to support FrontPage/SharePoint several years ago, but Elvira still wanted her kids to research a country and share their ideas with their peers (and parents and grandparents, ideally). Elvira switched to OneNote for her “Country Projects” and instead of hyperlinks taught the kids how to link one OneNote page to another. OneNote required less direct instruction in terms of logistics than did FrontPage and actually enabled even greater flexibility in terms of embedding audio, video, and other media. In the past, kids would spend inordinate time on “prettying up” the websites, time now spent on content itself. (Read my entry about OneNote)

One of the other great things about Elvira and August is how she asks us every year for help installing e-texts on her kids’ machines. I chose not to write about this specific example above because it was so long before my tenure at Country Day that I don’t have much context on it other than to assume that years and years ago (seven or more at least), she decided that offering her kids a dynamic text to use on their tablets would be the one thing she tried that year. You know, it stuck.

(In case you were wondering, this is Elvira’s 29th year at Country Day!! Sam Tumolo made it to 38 and then retired in 2011. They are both considered technology superstars at Country Day, but more importantly, they’re just great teachers who are passionate about Spanish and math and the lives of children.)

Martin is currently the Academic Dean at Cincinnati Country Day, where he teaches English and history in the Upper School and runs the Pedagogical Growth and Development and Curriculum Review programs. Working with Technology Director Rob Baker, he helps administer the oldest 1:1 program in the country. Martin and Baker host three Tablet PC Conferences at Country Day during the school year to help other educators experience the powers of their technology-rich environment. Prior to coming to Country Day, Martin helped another Cincinnati school launch a Tablet PC program. He has also taught at the college level, initially as a teaching fellow in Kent State University's Technology and Writing Research Classroom, a space where scholars could explore the relationship between technology and the composition process. Martin is married and has three children. He plays ice hockey in his spare time to blow off steam. Google

Tablets in the Classroom: Where are the Hybrids?*