What Happens When You Receive More Classroom iPads than you were Expecting?

Give the students goals for use, and then let them figure out the best way to use their iPad. 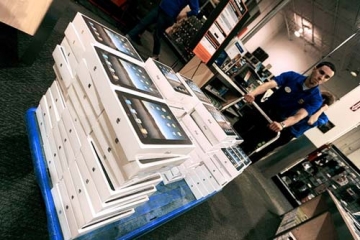 “Mr. McCrea, your iPads arrived today. All 30 are in the cart already.”

I had no idea what to say. For the last two months, I had planned for the 10 I wrote into the classroom grant, known what I would do with them and how I would integrate them into group projects in the class. There’d be one iPad for every 3-4 students, and I was all ready for what I had coming. With that one sentence, all of the planning I had done was all for naught, and I’d be going back to the drawing board.

I wasn’t even sure where to start. Luckily, an “unconference” I had been planning - EdCamp DC - was coming up that weekend, so I knew there’d be a solid chance of getting the ideas I’d need to pull off a nearly 1:1 implementation in my classroom.

Of course, I was also in a very unique situation. I teach an engineering and technology class, and part of that same classroom grant for the iPads was for a 1:1 classroom set of laptops, so I wasn’t interested in using the iPads for something that the laptops could do better (word processing especially). I was set on finding uses for my iPads that would really allow for some outside of the box work in the classroom. My class is also heavily individualized. Students are given a set of projects at the beginning of each quarter and a goal number of points to earn by the end of the term. The projects they complete are aligned to their interests, ranging from medicine to space science, architecture and computer science, and a few other topics in between. This also meant that not all 30 of the iPads had to be used for the same purpose.

EdCamp came and went, some new ideas were heard, and the re-planning process began in earnest. I picked up a few practical ideas, but more importantly, I picked up a philosophy of using the iPads - give the students goals for use, and then let them figure out the best way to use their iPad and then have the students set them up (of course, taking all precautions for security along the way).

Check out my next post on iPad Classroom Setup
Posted in: Tablet Teacher Blogs, Teacher insight on implementing tablets in the classroom

Matt is a middle school STEM teacher and department chair in Prince George's County, Maryland. Outside of teaching, Matt consults for educational gaming and technology projects and is chairman of EdCamp DC. Matt blogs about teaching and leadership at matthewmccrea.com and tweets at @matt_mccrea. Google